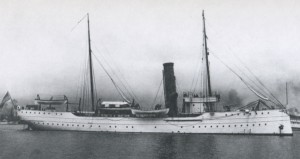 Mohawk was temporarily transferred to the United States Navy on 6 April 1917 for service in World War I retaining her Coast Guard crew. While serving on coastal duty in connection with convoy operations, she was struck in Ambrose Channel by the British tanker SS Vennacher and sank on 1 October 1917 off Sandy Hook, New Jersey. All 77 crew members were rescued by USS Mohican and USS Sabalo. The water was deemed too deep to warrant salvage operations (100 ft) so Mohawk was left where she sank.