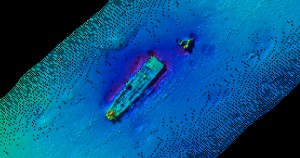 The Sandy Hook was a 168-foot pilot boat that sank off New Jersey on April 27, 1939. She was heading out in a dense fog to meet the Norwegian passenger liner Oslofjord. Unfortunately the Sandy Hook crossed the bow of the liner and was rammed. The Oslofjord suffered litte damage, but the hull of the pilot boat was breached and sank in about 90 feet of water about a mile east of Ambrose Light. Thirty passengers aboard the Sandy Hook were rescued. No lives were lost.