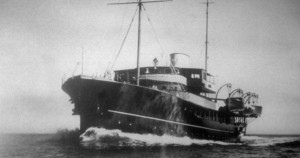 The Valiant was a palacial yacht (162′ x 26′) built in 1926 by Newport News Shipbuilding in Virginia. Christened the Aras by her original owner, she was soon renamed the Valiant when she was sold to West Coast Buick distributor Charles S. Howard. After a long journey from the South Pacific, Howard decided to stop at Catalina Island before the final leg home to San Francisco. On December 13, 1930 the Valiant was anchored in Descanso Bay near the City of Avalon, CA. Onboard were several prominent guests from Los Angeles and a crew of 22.

While dinner was being prepared and the guests were enjoying cocktails in the salon, an enormous explosion occurred in the engine room caused by the Valiant’s onboard gasoline generator. The resulting fire soon engulfed the boat. Fortunately all of the passengers and crew were able to escape. The Valiant burned for three days before finally sinking to the bottom 90 feet below. Today the wreck is a popular dive site, but does require a permit from the Avalon Harbormaster in advance.

The Valiant was surveyed in 2008 by the Seafloor Mapping Lab, California State University Monterey Bay, aboard the R/V VenTresca. http://seafloor.otterlabs.org/index.html