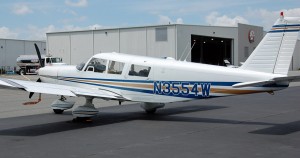 On November 3, 2001, at 1645 Pacific standard time, a Piper PA-32-260, N3516W, experienced a loss of engine power during departure climb and ditched into the Pacific Ocean about 5 miles north of Catalina Island, Avalon, California. The airplane was not recovered and is assumed to be substantially damaged. The private pilot and his two passengers were not injured. Visual meteorological conditions prevailed for the personal cross-country flight, which was operating under the provisions of 14 CFR Part 91, and a flight plan had not been filed. The flight was originating at the time of the accident and was en route to Carlsbad, California.

According to the pilot’s written statement, he inspected the airplane prior to departure. They took off from runway 22 and proceeded with a right downwind departure. While departing the downwind (approximately 3 to 5 miles northeast of the airport), the engine “began to flutter then made several loud metal to metal sounds.” The pilot said that the engine continued to run and produce partial power, but he made an emergency radio call and attempted to return to the airport. Though the engine was still running, the airplane lost too much altitude to make the airport so the pilot diverted north along the coast, away from the island cliffs.

In less than 1 minute the engine lost total power. The pilot located a boat in the water and ditched the airplane as close to the boat as possible (within 100 yards). The pilot and his passengers manually filled up the buoyancy control vests that they had in the airplane for a scuba diving trip and swam away from the airplane. Within 4 minutes, a 4-man rubber boat picked up the pilot and passengers and took them to a larger boat.

The Catalina Island airport manager stated that a pilot reported hearing the accident airplane prior to departure and that the engine sounded “terrible or strange” to him.

Review of the aircraft’s maintenance records revealed that the airplane underwent its last annual inspection on September 23, 2000, at an airplane total time of 3,462.5 hours. Due to the fact that the airplane and engine were not recovered, the reason for the loss of engine power could not be determined.

This aircraft wreck is sometimes erroneously referred to as a Piper Warrior. Water depth is 120 ft.