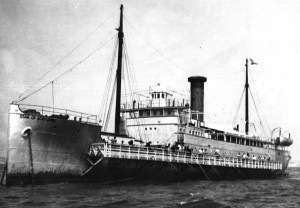 The STAR OF SCOTLAND was originally the Q-Ship HMS MISTLETOE built in 1918 for the British Admiralty. She displaced 1250 tons and had a length of 262 ft. HMS MISTLETOE acted as a submarine decoy ship during WWI, designed to carry out surprise attacks on unsuspecting U-boats. After the war she was sold to private interests. She changed hands many times and had many names before arriving in Santa Monica Bay as the gambling ship TEXAS. In 1940 she was renamed the STAR OF SCOTLAND and was operated as a fishing barge.

On January 23, 1942, under the relentless pounding of heavy swells, her seams opened up and the STAR OF SCOTLAND plunged to the bottom of Santa Monica Bay. Four of the five men aboard where rescued.

NOAA multibeam sonar survey H11883 covers the wreck site of the STAR OF SCOTLAND. The survey was conducted by Fugro Pelagos aboard the R/V QUICKSILVER for NOAA and the California Coastal Conservancy as part of the California Seafloor Mapping Project.