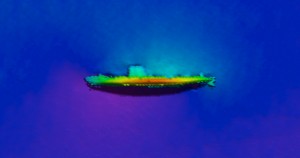 Submarine USS BLENNY (SS-324) reached the end of her useful life after a noteable career serving in both WWII and Korean wars. BLENNY was decommissioned in 1969 and was placed in the reserve fleet. She was struck from the US Naval Register in 1973 and on 7 JUNE 1989 the aging submarine was sunk 15 miles off Ocean Beach, Maryland as an artificial reef.

USS BLENNY was surveyed by the M/V Atlantic Surveyor in 2008 as part of NOAA multibeam survey H11992. You can clearly see BLENNY resting on her starboard side in 70 ft of water.