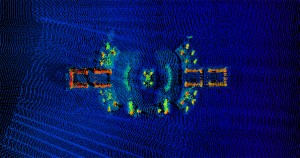 The Neptune Memorial Reef originally conceived by Gary Levine and Designed by Artist Kim Brandell and known as the Atlantis Reef Project or the Atlantis Reef is an underwater mausoleum for cremated remains in what was conceived by the creator as the world’s largest man-made reef (covering over 600,000 square feet of ocean floor) at a depth of 40 feet.

The reef site was surveyed with multibeam sonar in 2009 by Ocean Surveys, Inc. aboard the R.V. Able II. Multibeam sonar data for this survey (H11989) is available from the National Geophysical Data Center.