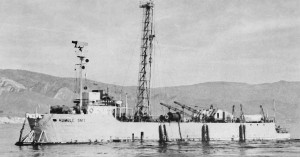 HUMBLE SM-1 was a former World War II landing ship, medium (LSM-251). Built in 1944 by the Western Pipe & Steel Co., San Pedro, CA. Commissioned on December 31, 1944, Lt. Randall Mann Snow, USNR in command. Operated in the Pacific and decommissioned on January 1, 1947. LSM-251 changed hands several times over the years and was eventually purchased by the Humble Oil and Refining Co. in 1956 and renamed HUMBLE SM-1. She was finally sold to the Global Marine Exploration Co. in 1960.

HUMBLE SM-1 conducted exploratory drilling operations off the coast of California until November 25, 1961 when she was caught in a fierce storm and was pounded by high winds and heavy seas. Waves eventually flooded the 200 ft barge causing her to capsize and sink in 75 feet of water. Eighteen crew members were rescued without loss of life.

NOAA multibeam sonar survey H11951 covers the wreck site of HUMBLE SM-1. The survey was conducted by Fugro Pelagos aboard the R/V QUICKSILVER for NOAA and the California Coastal Conservancy as part of the California Seafloor Mapping Project.

Check the gallery below. Multibeam imagery shows the ship in an inverted position on the seafloor. You can clearly see the ‘moon pool’ in the center of the ship that was used for drilling operations. The point cloud images depict the individual soundings collected by the multibeam echosounder. Note the anchor / cable guard ‘mustache’ on the bow.