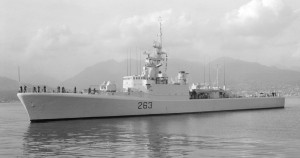 The Yukon is the latest contribution to San Diego’s Wreck Alley. At 366′ feet in length, it is one of California’s largest wrecks accessible by divers. As the newest wreck, it is also the most intact wreck divers can visit.

Through the efforts of the San Diego Oceans Foundation, the Yukon was towed down to San Diego, gutted and cleaned. On Thursday, July 13th, she was towed out and moored off Mission Bay in preparation for sinking. Explosives were placed forward and aft to sink her. The plan was to blow holes in both sides of the bow below the waterline, then blow holes in the stern. This systematic opening of the hull allowed water to fill both the port and starboard sides simultaneously, allowing the ship to settle upright. Unfortunately, the plan was never executed. That night swells rocked the ship, allowing water to enter the holes cut low to the waterline and shortly after midnight, her bow headed for the bottom. Rolling over on her port side, the stern stuck up in the air and it too sank to the bottom a hundred feet below.

The above textual description was provided by Steve Lawson / California Wreck Divers.
http://www.cawreckdivers.org/wrecks/yukon.htm