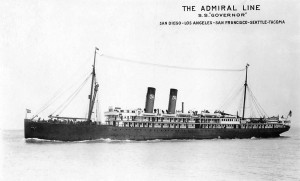 The SS Governor (417 ft x 48 ft) was an iron hulled coastwise passenger steamer built by the New York Shipbuilding Co. in 1907. She served the west coast ports of Seattle, San Francisco, Los Angeles, San Diego, Victoria and Vancouver. Just after midnight on 1 April 1921 the Governor, bound for Seattle from San Francisco, was rammed by the freighter West Hartland less than a mile off Point Wilson on the Olympic Peninsula. The West Hartland struck the Governor on the starboard side ripping open a large hole in her iron hull. She quickly began taking on water. The Governor stayed afloat for 1 hr and 11 minutes, just long enough to rescue most of the 297 passengers and crew. Only eight lives were lost.