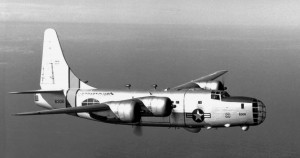 P4Y-2 (BuNo 59695) crashed into Lake Washington immediately after takeoff from Sand Point Naval Air Station on 26 August 1956. The following is an excerpt from the Navy accident report.

Lt. Thorson, pilot, and Lt. Shook, co-pilot, were scheduled for a local 2 hour training flight in P4Y-2 BuNo 59695 at 9:30 a.m. on August 26, 1956. Due to marginal VFR conditions, they were briefed to conduct GCA runs and remain in the local pattern until the weather improved. Lt. Thorson checked the aircraft, assembled and briefed his crew, and pre-flighted the aircraft. After a delay caused by an autosyn circuit breaker being out, Lt. Thorson requested taxi clearance and was cleared to the warm up area for runway 14 at 10:15 a.m. By this time, the field had gone IFR and an additional delay followed. In the meantime, the pilots completed the engine run-up and the take-off checklist (inadvertently missing the flaps). Lt. Shook intended to make the take-off from the right hand seat. At 10:25 a.m., the field was again VFR. At 10:27 a.m., the tower informed the aircraft that the field was VFR and cleared the aircraft for take-off. Lt. Thorson taxied the aircraft into position for take-off at 10:33 a.m. and completed the “In position for Take-off” checklist. At 10:34 a.m., Lt. Shook commenced the take-off.

The aircraft became airborne just prior to reaching the end of the runway in a near level attitude, no more than one to two feet in the air. As it passed the end of the runway and over the waters edge, a drop of about 10 feet, the loss of ground effect caused it to settle immediately. The aircraft settled to the water at full power about 300 feet from the end of the 5,000 foot runway. The aircraft planed on the main gear and belly and settled to a stop about 5,000 yards past the point of initial impact. An orderly ditching procedure followed. All personnel were out of the aircraft in approximately 45 seconds and in life rafts shortly thereafter. The aircraft sank in 175 feet of water in approximately 2 _ minutes. The personnel were rescued by the NAS Seattle crash boat about 4 minutes later. Lt. Shook and one crewman received minor injuries while vacating the aircraft.

The aircraft left the runway at an estimated 110 knots in a near level attitude with full power on all engines. Initial impact with the water was very light and the aircraft planed along smoothly on the main gear and belly and gradually settled into the water. During the run-out on the water, the bomb bay doors ripped open and one bomb bay tank was torn loose from the aircraft. All propeller blades were slightly bent from impact with the water. No other damage is believed to have occurred to the aircraft.

The P4Y-2 was covered by NOAA Ship Rainier during multibeam survey cruise H11293 in 2004. Contrary to the accident report the aircraft lies at a depth of 155 ft. P4Y-2 59695 is the property of the U.S. Navy and removal of artifacts or disturbing the site in any way is prohibited.