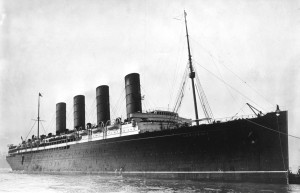 100 years ago this month (May 7, 1915) British ocean liner RMS Lusitania was torpedoed and sunk by German submarine U-20 off the coast of Cork, Ireland. U-20 fired a single torpedo sending the Lusitania to the bottom in 18 minutes with the loss of 1,198 lives. In 1995 the Irish Government declared the wreck a heritage site under the National Monuments Act. Today the wreck is owned by American Gregg Bemis and any diving on the wreck requires permission from the owner and the Irish Government.

In 2010 the Geological Survey of Ireland surveyed the wreck site of RMS Lusitania as part of the INFOMAR Programme. The multibeam sonar survey was conducted aboard the RV Keary. Survey ID KRY10_02.